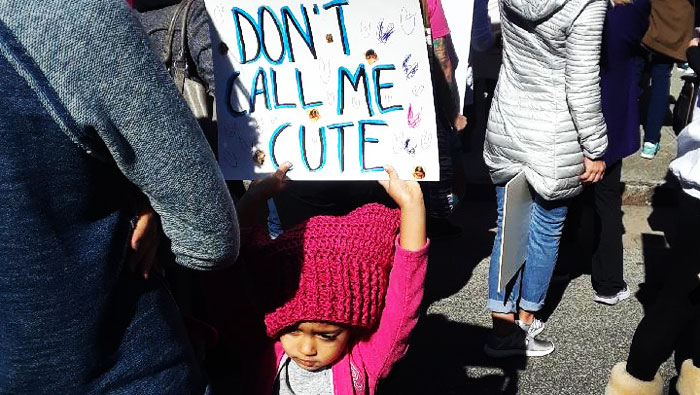 A few years ago, I never dreamed I would be handing out pussy flowers to a hundred women in my town. But that’s what I did this past weekend at the Women’s March 2018

On Saturday, I had the honor of taking my two kids (ages 4 and 7) to my city’s Women’s March 2018. It was incredible sharing with them the importance of attending. My daughter got to make her own sign. My son got to witness what happens when a village of women comes together to support each other and make change.

And I got to hand out vulva-shaped flowers to as many women as I could!

Here at Enflowered, we saw this as an important opportunity to share our symbols of women’s empowerment with like-minded people. We didn’t want to sell them; we wanted to give them to individuals as a sign of love, solidarity and femininity. (Plus, they look so good on a pussyhat!)

I half expected some people to make a weird face, laugh or say no. I must say, I was surprised at the reactions I got.

I thought I’d get some odd remarks as I exclaimed loudly to talk over the blaring speakers: “WOULD YOU LIKE A PUSSY FLOWER?!”

Every single person was overjoyed by the gesture.

Moms gave them to their daughters to wave around. A dad showed one off in his pocket. The sight of a pussy hanging out of dad jeans may have made my day!

“Mine has a treasure!!!” one lady yelled back to me.

“Oh, that’s the clitoris,” I laughed.

“Well, yes, that is quite some treasure then, isn’t it?” she replied.

My daughter enjoyed handing them out too! Adorned with her pussyhat, she scoured the crowd for women wearing a hat like hers. “Would you like a flower?” she would ask them.

Who could say no??

We were finally down to one flower, who I gave to a lovely mother of two. As I watched her swaying, her baby in a carrier and a young daughter’s hand in hers, I thought she looked like she could use one.

Later that night, that mother messaged me. “I can’t tell you how much that pussy flower made my day!”

Our unique, crocheted flowers aren’t all about the pussy. They’re not about the buttons, jewels and beads that shine from within as the almighty clitoris. Even though we spend hours at the craft store debating what kind and color of yarn to buy, it’s not about the color combinations or the softness of the yarn.

It’s about the gesture. It’s about one woman saying to another woman, “I see you. I resonate with you. I love you, you are my sister.”

It’s the power of the flower.

Maybe I’m a little Kumbaya from the Women’s March 2018. This might sound a little corny, but fuck it. I’m happy to spread my pussy flowers with my fellow women, feminists, dads, birth workers, kids and all mankind alike.

I’m happy I have a vagina. I’m excited to be alive in this time and during this movement. I’m glad I can pass these ideals onto my daughter and my son. My daughter holds a pussy flower to show that she’s strong, kind and generous and doesn’t like to be called “cute.” My son isn’t afraid to hold a pussy flower, and if someone calls him a pussy he will laugh and say thanks.