Is The Pink Pussyhat Dead? Why We Shouldn’t Give Up On This Symbol Right Now 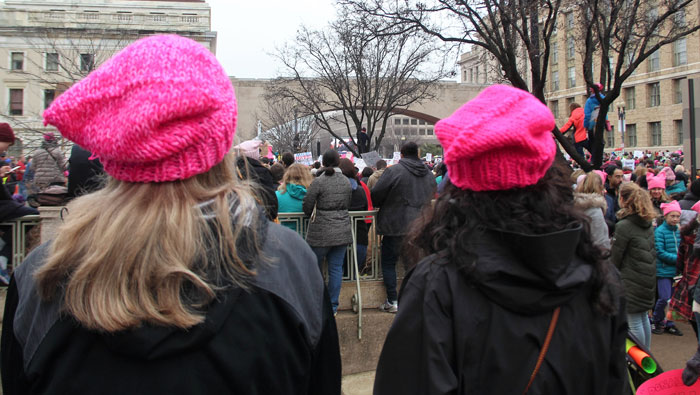 As people gather for the 2018 Women’s March to celebrate the anniversary of last year’s groundbreaking event and the launch of #PowerToThePolls, some people are putting away the pink pussyhat. The hats, which were co-created by Krista Suh and Jayna Zweiman to serve as symbols of pussy power in the wake of Donald Trump’s “grab ‘em by the pussy” remark, were used in part to reclaim the term for a woman’s genitalia. In a world where “pussy” is often used in a derogatory, vulgar or insulting way, women wanted to celebrate one of their sources of identity, femininity and power and even reclaim the word “pussy”.

Criticism Of The Pink Pussyhat

It hasn’t been all rainbows and butterflies, though. Many critics came down on the creators of the pussyhat for being vulgar. Others said that they were excluding women of color, gender non-binary people and transgender women.

Many organizers are asking women not to wear their pussyhats for the 2018 marches, including the Pensacola, Florida branch of the Women’s March. If we’re trying to unify these groups that have long been stifled, we’re inaccurately classifying them by their biology, they argue. We’re still marginalizing those without vaginas.

Symbols Of Social Movements Can Work In Harmony

Every social movement develops a symbol or group of symbols to represent itself. Yes, these symbols are an attempt to create unity, but they’re also a way to access our emotions and get us to learn more. Here’s the thing: There doesn’t have to be a solitary symbol for each social movement.

In the Black Lives Matter movement, skittles, hoodies, covering your mouth with tape, and the hashtag #BlackLivesMatter were all adopted as symbolic icons.

When we’re talking about empowering women, can’t we each use symbols that resonate with us? And who said we can’t use these talismans together, in unison? Why not make a hat, or a T-shirt or a sign that represents what makes you amazing?

Vaginas Represent Only One Aspect Of Feminine Empowerment

Listen: Women aren’t saying that their pussies are the only emblem of their femininity. Sure, they may derive power from their reproductive region, but bringing attention to the pussy is only one way to feel empowered.

Yet it’s an important way.

The women who do find power in the pussyhats are simply saying, “This resonates with me for some reason. I feel stronger, invigorated, more fulfilled when I celebrate my pussy.”

Not to dumb it down, but blonds supposedly have more fun, right? Well, as a chestnut-headed woman, I’m not going to stop them from celebrating their hair color as a way to enjoy life. Let them have their fun. Go for it. Celebrate what makes you you.

Many women have vulvas and vaginas. That’s a fact. And today’s woman isn’t the first one to frame it as a source of power. Ancient cultures revered and prioritized women’s vaginas.

The native Hawaiian folk tale about the goddess Kohe-kohe-lele talks about Kapo, who used her flying vagina as a life-saving superpower.

Disney’s Moana leaves out one of the most important parts of the legend: Maui was killed when he climbed inside the sleeping Hine-nui-te-po’s vagina while she was sleeping. She woke up, closed her legs and crushed the life out of him.

In Greek Mythology, the goddess Demeter becomes so distraught over the abduction of her daughter, Persephone, that she stops speaking. Because Demeter is the goddess of fertility and harvest, the earth dries up as her depression worsens. It’s only when the goddess Baubo “uncovers her secret parts” that Demeter begins to awaken, amused by the power of the pussy.

In the Marquesas Islands, the Polynesian communities believed that female genitalia could ward off evil spirits.

The Pussy As Personal Empowerment

Even if we leave out the part of history that involves patriarchal philosophies all but wiping out the power of the pussy, we can look at the symbolism in purely personal terms.

Among the movement to bring attention to women’s rights and human rights is an individual desire that many women have to simply reconnect with themselves. Women want to feel more fulfilled. They want to be able to show up as their authentic selves. Within the constructs of mass movements, many women are quietly working on this aspect of their lives too.

They turn to self-help books and inspirational websites. They might take up practices like doing yoga to connect their mind and body or eating clean foods to bring wellness to their physical bodies. They’re going to therapists and meditation to try to gain mental clarity. They’re also exploring past trauma and shame, much of which is related to their sexuality, and—yes—their pussies.

If you really want to feel whole, you need to be aware of what’s going on in your body, mind and spirit. And if you have a vagina, that’s just one piece of the puzzle.

We Can’t Ignore What’s Deeply Entrenched In Us

Vaginas have a cellular memory. Cells contain DNA, which is the map for our entire physical design. They store information about everything that has ever happened to us. Our vaginas remember pleasure, but they also remember any pain and trauma that they’ve been subjected to.

Giving your vagina some attention can help you celebrate what drives your passions. This is not just in the sexual sense; it relates to everyday pleasure. Bringing your pussy into the limelight can also help you process past shame or suffering.

Women and other marginalized groups are feeling more and more comfortable enough standing up and demonstrating that they’re not afraid to explore their place in the world. Yet we’re still trying to silence pussy talk.

Can’t we all do us, but do it together?